Cháteau de Pez serves as one of the oldest wine estates in two regions. It is so for the northern parts of the appellation of Saint-Estèphe and in the Left Bank of Bordeaux. The history of the winery begins in the 15th century. In the 17th century, it was under the possession of the Pontac family. The family was the owner of Château Haut-Brion.

The Pontac family initially handled Cháteau de Pez and Château Haut-Brion as two separate wineries. However, at some time, they gave the former the vineyards of the latter. Nevertheless, the entire wine estate remained with the descendants of the Pontac family. It continued till the French Revolution. After that, the property got acquired by the state and sold. It allowed for multiple changes of owners of the winery. Cháteau de Pez went into the hands of several families over the years. Ultimately, in 1995, the property got acquired by Louis Roedererer, a renowned Champagne House.

Today, Cháteau de Pez expands over 118 acres of continuous land. In total, 103 acres remain dedicated to the plantation of noble grape varieties. They include Cabernet Sauvignon and Merlot.

The vineyards owned by the winery get blessed by advantageous wind currents, rainfall distribution, and sunlight exposure. The region experiences a suitable temperature difference between night and day and a beneficial microclimate. On top of that, the plot has gravel over clay-type of soil. It allows for sufficient drainage. All these factors permit the slow maturation of the grapes, making them juicy, flavourful, and plump.

The high-quality grapes allow Cháteau de Pez to produce superior standard wine for every bottle. This high quality of winemaking makes the winery one of the most reputed and notable crus of the region of Médoc. In 2003, Cháteau de Pez got re-categorized as Bourgeois Exceptionnel. 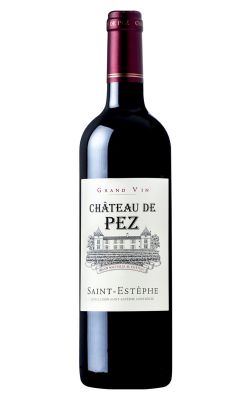