If you haven’t encountered orange wine before you may be forgiven for thinking it is made from oranges. This new kid on the block is actually an ancient wine, which has started to experience a resurgence in popularity because of the way that it is produced - and its unique flavour and colour.

In Georgia, where it originated, orange wine is known as amber wine. In the mid-2000s an English wine merchant started referring to it as the less romantic (and confusing) ‘orange wine’ and the name stuck. Orange wine is made from white grapes and gets its intense colour and flavour via a process of maceration, or ‘skin-contact’ winemaking. During production, the skins and seeds of the grapes are left in contact with the juice, for days, weeks or even months - adding flavour, tannins and pigment. The orange shade of the wine comes primarily from a substance called lignin, present in grape seeds, which also gives it a textural complexity - like a red wine version of white wine. 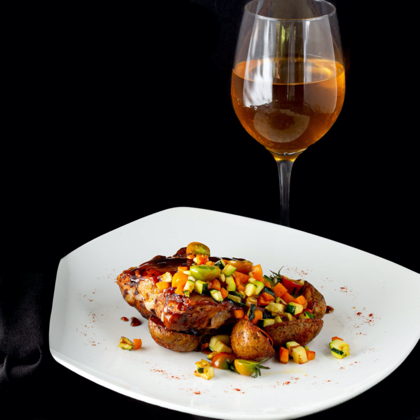 Available in a variety of hues - from pale amber to deep russet - orange wine can also vary considerably in taste too with a range of complexity, unusual aromas and intense flavours. Orange wines tend to surprise if you’ve not tried them before, which makes them rather exciting.

These big, bold flavours mean that orange wines tend to be exceptionally food-friendly as they pair well with strong flavours that can other wise be difficult to match. Rich tagines, spicy curries, intense garlic and mature cheese all taste delicious with a glass of orange.

Flavour aside, orange wine has also become popular is because it is often seen as a natural wine. Many consumers seek organic, ethical products from smaller producers and although not all orange wines are natural, they are generally made by smaller wineries using a low-intervention style of winemaking that is a world away from typical white wines. Their sustainable and environmentally-friendly production processes and the seemingly close contact between winemaker and wine drinker have seen orange gain an enthusiastic following alongside other natural or artisanal wines. 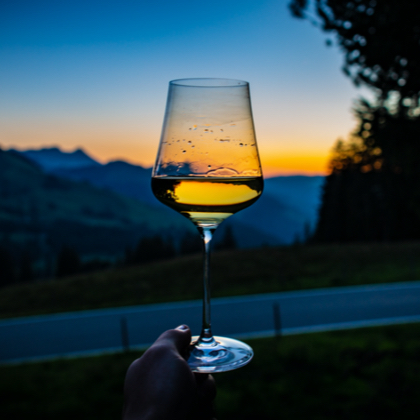 Orange wines originated in the mountains of Georgia in Eastern Europe - one of the oldest winemaking regions on earth. Although the process of making orange wine (or amber wine as it is known in Georgia) has been around for thousands of years, it only began to regain popularity in the last 20 years or so. Some winemakers in the region still use the traditional process of producing orange wine in large curved clay jars called qvevri (or kvevri),which are lined with beeswax and buried in the ground to support the jars and keep them cool. Every part of the grape is added to the jar - juice, skins, seeds and stems – which are then sealed with a wooden or stone lid and left to ferment naturally for several months. The curved shape of the jar aids the fermentation process.

Are you ready to try orange wine? Here are some of our best bottles that we recommend for anyone keen to experience something different, and delicious:

If you are new to orange wine then we suggest starting off with a good Georgian orange wine such as Pheasant's Tears Rkatsiteli 2018. A great introduction to orange wine, with a unique, textured flavour that comes from Rkatsiteli (red stem) grapes, an ancient pale-skinned variety which have been cultivated in the area for several millennia. All of the wines at the Pheasant’s Tears winery are fermented using traditional techniques, in buried clay qvevri, with natural yeast fermentations. The name ‘Pheasant’s Tears’ refers to a Georgian story in which only the very best wines are good enough to make a pheasant cry. Pheasant’s Tears Rkatsiteli is golden amber in colour with a smoky and nutty tang.

Although Georgia is the home of orange wine, most of the orange wine produced today comes from Italy, where it has risen in popularity after being revitalised by winemaker Josko Gravener in 1997. Our favourite Italian orange wine, COS Pithos Bianco DOC 2018 hails from Sicily. Made from Grecanico variety grapes, grown in Vittoria and Fontane. Pithos bianco has a complex spicy and nutty palate, with savoury notes. The powerful flavour makes it an ideal pairing with intensely flavoured foods including Korean, Japanese or Moroccan cuisine. The COS winery was founded in 1980 by three friends with a passion for natural, low intervention winemaking and biodynamic viticulture and this natural approach shines through in the flavour of the wine.